ANCB The Metropolitan Library continues its collaboration with the Heinrich Böll Foundation Berlin, and is pleased to also collaborate with the British Council. This expert discussion explores a mutually supportive relationship between migration and the city by tracing the experience of the migrant; as they are drawn to a city, as they experience their new physical and social surroundings, and utlimately, as they become politically engaged for the future of that city. 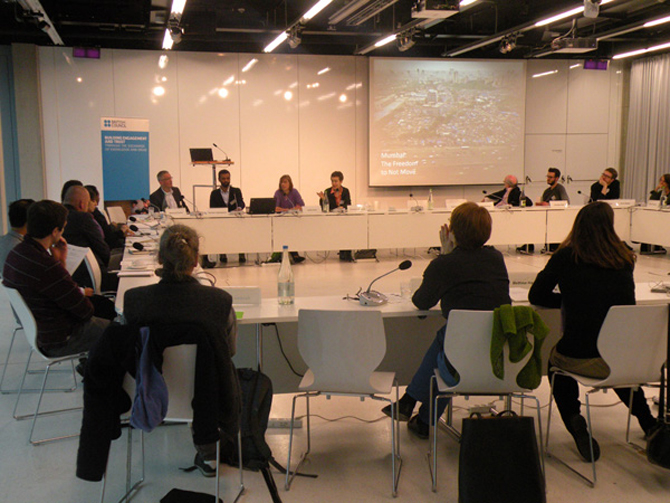 The movement of people to, from and within cities is constantly evolving. Over the centuries, flows of people have impacted the development of cities as centers of politics, economy and culture. This transformative process continues today: the United Nations Population Fund 2007 report found that for the first time in history, more than half of the world population lives in urban centers. For some, this urban living means thriving and succeeding, but for others it means barely surviving. This is equally so for the city; while migration brings enormous economic, social and cultural opportunities, it can also present significant challenges for some cities through the scale of associated socio-cultural, socio-economic and even physical transformation.

This expert discussion session traces a narrative of the mutually transformative relationship between migrants and their new city environment. The economic opportunities offered by the city are often the pull factors in bringing people to cities. The city’s spaces, private and public, indoors and outdoors, modify the personal and collective experiences of the migrant and determine how comfortable and involved his/her new life in the city becomes. And finally, this in turn influences how migrants are affected by and help to modify/advance the political, social, economic and physical infrastructures of the city.

Panel I: The Pull of the City
Cities are centres of commercial, educational, and cultural industries. Indeed, the dynamic economies of cities are often the reason people move there. But what is the reality in the city? Are migrants concentrated in certain industries over others? How accessible is the job market to all inhabitants of the city?
The inclusiveness of the labour market is one of the determining factors of how positively migration impacts urban societies. When flexible enough, the labour market can benefit from the new economic opportunities created by migration. Cities’ policies, too, have a deep impact in fostering entrepreneurial initiatives of migrants. This panel seeks to discover how migration can be used to its fullest potential and what role cities play in making that happen.

Panel II: The City’s Spatial Embrace
The configuration, availability and cultural accessibility of urban spaces significantly impacts the lives of city dwellers — where they live and work, who they interact with, to what extent they can avail of social and other services. And critically — because it is deeply tied up with spatial experience – urban spaces affect how the identity of the dweller evolves as an individual and as members of one or more cultural groups. In the worst case, the design of urban spaces (and private living spaces) can inadvertently discriminate against cultural practices or lead to segregation between urban communities, and consequently to less cohesive societies. How can urban planning agendas, architectural and urban design concepts, housing policies, and neighbourhood level initiatives improve urban spaces, making them accessible to all?

Panel III: Urban Citizenship and Civic Engagement
A wide variety of people live side by side in the city. Despite their diverse backgrounds, each calls the city “home”. The city (or even neighbourhoods) gives people a place with which they can identify, a place in which they can meaningfully engage. Indeed, cities are often successful in merging collective identity.
Also, despite the fact that most social conflicts are concentrated in city areas, cities are spaces where democracy, inclusion and participation can be practiced intensely. This panel will discuss cities and urban neighbourhoods as key players in the civic engagement of its residents and seek to answer the question: How can cities serve as platforms for more inclusive forms of citizenship and engagement?