A Film Screening within the frame of the Design Studio of Universidad Diego Portales, SantiagodeChile at ANCB and on the occasion of the 200th anniversary of Chile's independence, 18 September 2010 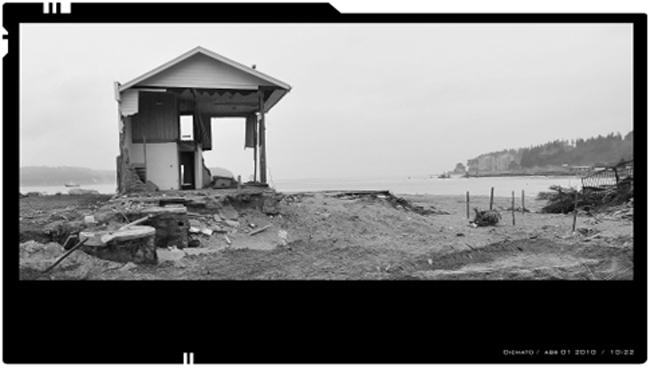 The documentary, which was selected for the Chilean Pavilion at this year's Biennale in Venice, monitors the traces of debris and destruction left by the 2010 tsunami in Chile. The visual material was taken on a trip to the affected area a month after the incident and forms the main longitudinal axis of this assembly trip. Dramatically different from the stridency of the news coverage that lasted for weeks and formed Chile's reality of the disaster, the film's capture and editing - without resorting to testimony - had the purpose of constructing a "trace file" of the tsunami, including silence. The devastation and abandonment function as eloquent signs of the disaster's magnitude. Designed to be played on loop, the film, though only twenty minutes long, seems virtually infinite in order to cause the evocation of the destructive event and its incalculability through an endless sequel of ruins and debris.

Producer Mathias Klotz, Dean of the Department of Architecture at the Diego Portales University in Santiago, Chile and Director Carlos Perez Villalobos, Philosopher, will introduce their film and lead a conversation with the audience after the screening.